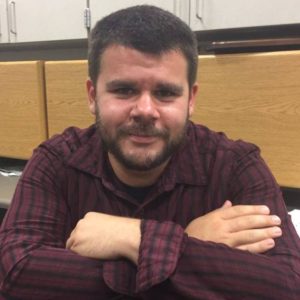 The Blue Knights are pleased to announce Chris Murphree as the Front Ensemble Composer/Arranger and Front Ensemble Coordinator. Chris is currently a freelancing percussionist in Indiana, primarily working with Brownsburg and Plainfield High School.  He served as an arranger and teacher to both schools for the 2018 season. Prior to working with these schools he also served as an arranger and teacher for the Goshen High School Percussion program from 2015-2017. He received his Master’s degree from Indiana University, and his Bachelor’s degree from Middle Tennessee State University, where he also served as an Adjunct Professor of Percussion in 2014.

Chris marched with several groups including Spirit of Atlanta, The Cavaliers Drum and Bugle Corps, and Music City Mystique. He served as a front ensemble technician for the Troopers, Phantom Regiment, and Blue Knights throughout his teaching career. He has arranged for several groups across the country including Music City Drum and Bugle Corps, Orange County Independent, Tri-City Percussion, and more.