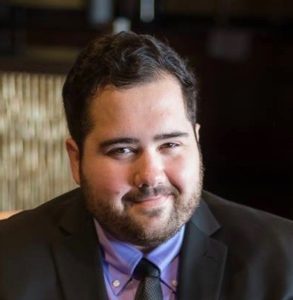 The Blue Knights are pleased to announce Christian Good as Sound Designer and Audio System Designer. Cristian is a well known expert and consultant in the marching arts audio community. Much of his experience was gained while serving as The Cavalier’s audio engineer during the 2014-2016 seasons. He has been involved in the WGI activity both designing and consulting for multiple indoor percussion groups around Indiana over the years. Christian has shared his extensive knowledge of the audio concepts and techniques used in the marching arts activity as the marching audio clinician at the Music for All Summer Symposium for the past several years.

Cristian is in regular demand as an electronics designer and system designer for schools both Indiana and throughout the United States.  He is currently the electronics designer for Bands of America Grand National Finalist and ISSMA medalist Homestead High School (IN) as well as Carroll High School (IN) who is an ISSMA State Finalist as well as IPA medalist. Cristian currently resides in Ft. Wayne, Indiana with his wife and pets where he works as a sales engineer at Sweetwater Sound while continuing to be involved in many outside projects in the marching activity.