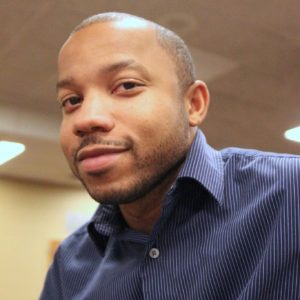 The Blue Knights are pleased to announce Derrick Shannon as the Battery Composer/Arranger and Percussion Caption Head. Derrick is a percussion specialist originally from the Chicago-land area.  He holds the Director of Percussive Arts position at Plainfield Community Schools who were the 2018 WGI PSA Champions in his first year with the program. He started Percussive Soundscapes which is a company that offers a variety of services to the marching arts community including custom arrangements for band and winter percussion ensembles. He taught at Ball State University, judges during the weekends and consults with numerous groups across the country.

Derrick marched seven summers of drum corps with groups such as the Phantom Regiment and Cavaliers, both in the battery and front ensemble. Afterwards, he became the Percussion Caption Head for the Phantom Regiment Drum and Bugle Corps and later the Percussion Coordinator and Battery arranger for the Madison Scouts. He is currently the Percussion Coordinator and Battery Arranger for the Blue Knights. Derrick is also a Creative Director for 317 Performing Arts which supports the independent world group Veritas. He received his Bachelors in Music Education at the VanderCook College of Music and his Master’s in Music Technology at Indiana University-Purdue University Indianapolis. Derrick proudly endorses Innovative Percussion, Pearl/Adams, Remo, and Etymotic. He currently resides in Plainfield, Indiana with his wife Kayla, two daughters Miyah and Olivia as well as his dog Max.