Mark Arnold Named DCI Director of the Year for 2015 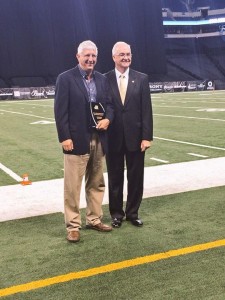 INDIANAPOLIS, IN – As the Blue Knights Drum & Bugle Corps prepared for DCI World Championship Finals competition on Saturday night at Lucas Oil Stadium sitting in 6th place (a placement that has only been matched one other time in Blue Knights history in 2000), Executive Director, Mark Arnold was recognized in front of thousands as the 2015 Drum Corps International “Director of the Year”.

This highly coveted recognition is based on votes by all of the DCI drum corps directors in the activity who recognized the outstanding contributions made by Mark. This is his second time being selected for this honor with the last time in 2004 when the Blue Knights hosted the DCI World Championships in Denver, CO.

He was also inducted into the Drum Corps International “Hall of Fame”, Class of 2014, for his incredible mark on the world of marching music. You can watch Mark’s 2014 Hall of Fame acceptance speech below by clicking on it: