A Look at Ascend’s Wild Weekend at Colfax

DENVER, CO – It was an incredibly busy and exciting weekend for Ascend Performing Arts. Not only did the Blue Knights Drum & Bugle Corps move in for all-day rehearsals, the Ascend team was able to attend the 10th annual Kaiser Permanente Colfax Marathon as a Charity Partner.

There were over 190 charity partners for the 10th anniversary of this marathon, many of which could be found among the bright, blue-peaked tents of Charity Partner Village. The Village was thick with the excitement of around 20,000 runners, friends, and families, and served as excellent exposure for the non-profit partners. Not only was the Ascend tent a finalist for the “Best Tent” award, being in the Charity Partner Village gave Ascend the chance to gain some visibility and spread the word about what makes them special–it is a local organization with a global impact. 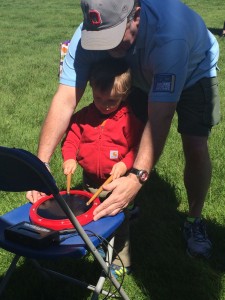 The team promoted ensembles, education clinics, and events, connected with Blue Knights alumni and runners, and hosted a “Fastest Drummer Contest.” This contest was incredibly popular with children and adults alike, and offered the winner free tickets to what Blue Knights Drum & Bugle Corps executive director and Ascend CEO Mark Arnold calls “one of our greatest events of the summer:” Drums Along the Rockies. Using a Drumometer (a drum pad and a meter counting the number of times the pad is hit in a set period), passers-by had the opportunity to see how fast their hands were in 30-second intervals. The winner of the “Open” division contest, Reno Mulumulu, had a score of 426 beats in 30 seconds (that’s a wild 14.2 beats per second)! In the “Alumni” division, 1987 Blue Knights top bass drum Eric “Breadloaf” Rine clocked an incredible 650+ beats! The contest was a great way to interact with the runners and families, and talk to them about what Ascend does. The favorite tagline was, “We know you have fast feet, but how are your hands?”

Presence at this event helped Ascend gain some recognition not only through the Charity Partner Village, but also through the publicity before and during the event. One of the most cherished things about the Colfax Marathon is that it’s all for charity, and they do their best to raise as much awareness about their partners as possible. Ascend was featured especially often–the Communications and Marketing director, Gregory “GM” Kuzma, appeared as a guest on the Colorado & Company TV show, and was interviewed on Fox 31; Ascend was one of the few charities that was featured on the news broadcast. 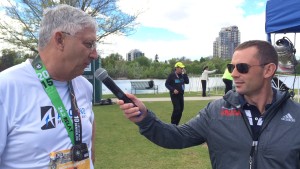 In addition to all that, director Mark Arnold had an interview at the finish line where he highlighted what Ascend does in front of a crowd of thousands. He touched on the three facets of the organization, all of which serve to further the mission to “Elevate Life Performance.” Arnold told the interviewer, “We create a stage in which young people pursue excellence through music,” and this is done through our performing ensembles (Blue Knights Drum & Bugle Corps, Blue Knights Percussion Ensemble, and Broncos Stampede and Broncos Brass), which provides our 200+ performers with a vehicle to showcase their excellence to thousands of people worldwide. On top of that, Ascend provides a stage for these performers as well, through hosting of events like Drums Along the Rockies and Corps Encore during the summer, and Friendship Cup scholastic marching band shows in the Fall. Ascend also stresses the importance of music education, and thus hosts multiple BKXperience clinics year-round that reach thousands of students. 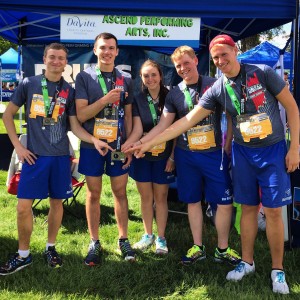 Mark Arnold wasn’t just at the finish line for the interview–he participated in one of the Colfax Marathon Relay teams that signed up to #RunForAscend. The relay teams divided the 26.2 mile marathon into five increments of varying length. Ascend had two teams running: a team in the Corporate Division, made up of Ascend staff members (including Arnold), and an Open Division team made up of some of the fastest 2015 Blue Knights Drum & Bugle Corps members, Grant Vincent, Andriy Sovetov, Mikala Mortensen, Andrew Precoor, and drum major Myles Giller. 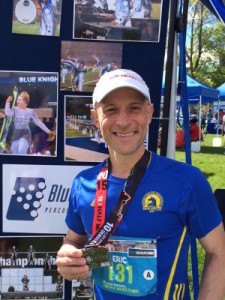 Eric “Breadloaf” Rine, a Blue Knights alumnus, #RanForAscend in the Half-Marathon and won the “Alumni” division of the Fastest Drummer Contest.

Rod Kosterman, Blue Knights pit tech, ran as part of the Ascend Performing Arts team and had an experience he will never forget. “Our mission statement is to ‘Elevate Life Performance’, right?” he said, when asked about his decision to run. “I had never done a race before, but being in drum corps taught me to, well, run. Ever since then, I’ve had some opportunities but never really pushed myself, so having the opportunity to be part of a team–a team that was a family I cared about–was a great motivator for me to push myself, to elevate my life performance.”

Both teams finished in great time, the Ascend team–with Cody Arnold, Rod Kosterman, Jordan Jacobsen, Gregory “GM” Kuzma, and led by Mark Arnold–finished in 3 hours and 43 minutes, which is an 8:32 mile pace, crushing their initial sub-9:00 minute team goal. The Blue Knights team’s finishing time was 3 hours 27 minutes–that’s a 7:42 mile pace! Their speedy pace landed them in 10th place out of the 342 teams in their division, and in the top 6% of the overall relay teams. Afterwards, they enjoyed some free Jim & Nick’s Barbecue and spent a little time around the tent before returning to the corps for 11 hours of rehearsal! It goes without saying: they never stop pursuing excellence. 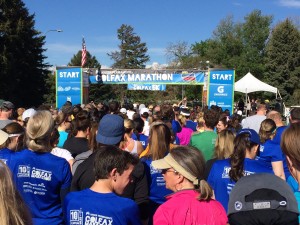 People crowd together on the starting line of the Colfax 5K.

Supporters in the community also came out to #RunForAscend. Sarah Anderson (Ascend Communications & Marketing Intern), Jordan Jacobsen, and Gregory “GM” Kuzma ran the 5K on Saturday, Christopher Paschke ran the Urban 10-Miler, Eric Rine ran the Half Marathon, and Damian Berger and Michele Hancock ran the full Marathon in support of the organization.

It probably helped to see some friends along the way–Ascend ensembles including the Broncos Brass, Broncos Stampede, and Blue Knights Percussion Ensemble played along the race route during the marathon and helped provide the upbeat, fun, and exciting atmosphere for which the Colfax Marathon is becoming known.