DENVER, CO – This February, the Blue Knights Winds ensemble will be taking the floor in competition for the very first time. In this alumni spotlight, we are looking at a number of the Blue Knights alumni making it happen. In addition to the alumni highlighted here, Blue Knights Winds would like to also acknowledge the contributions of the following alumni: Luke Story, Becky Paschke, Andy Smart and Ethan Goddard. 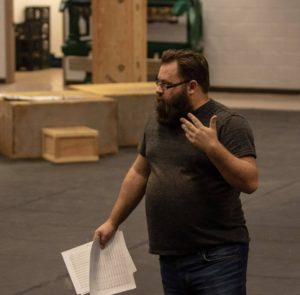 The Blue Knights are a big part of the music and marching ecosystem here in the Denver area and since the Drum Corps starting recruiting more out of state (which has been great for the corps) that ecosystem has broken down a bit. The Winds ensemble is a great way to re-establish the Blue Knights role as a way to generate and refine performance skills here in the area.

My time with the Blue Knights is when I learned how to push my limits and where I expanded my skills as a performer far beyond what I ever would have been asked to do in any other ensemble. It is my goal for this ensemble to provide the same experience to these performers. On top of that, the design and educational approach I was taught (and later taught myself) is one that is currently unrepresented in the Winds world and a great opportunity to distinguish ourselves from our competitors. 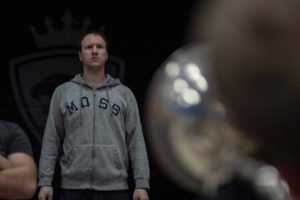 WGI winds offers a unique opportunity for brass and woodwind players to participate in the pageantry arts during the winter months without having to cross train to other instruments and disciplines and the Blue Knights are uniquely positioned to field an ensemble that will be successful and innovative in this new activity.

I was fortunate to be involved with the now disbanded Blue Knights Winter Brass Ensemble during the mid 2000s. At the time, we were experimenting with an ensemble that could be used as a recruiting and training group for local members in the drum corps. It was a wonderfully creative outlet for us, and I do believe the ensemble helped contribute to the successes of the 2006 and 2007 horn lines. In many ways that group was the precursor for what we are trying to do with Blue Knights Winds now.

My involvement with the Blue Knights as member, and later as an instructor for the corps, has informed so much of how I approach being an instructor for the winds group, as well as my current profession as a college professor. I have been lucky to have had wonderful teaching role models and mentors through my time with BK, and I have made life-long friendships. Director Abe Eng, and Visual Designer Robbie Billings are certainly two individuals that I would put at the very top of that list. I think that having alumni involved with the winds group will help us to establish an identity as a group and a connection to our parent organization that is consistent with the values of what it means to be a Blue Knight. 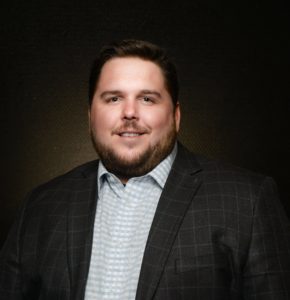 When I first heard that BK winds was starting up, my good friend Andy Smart and I had a discussion about getting the ball rolling. After speaking with Abe, I was very excited to get on board with the organization and “come home” to the Blue Knights. Teaching within this organization has been such a privilege, especially being part of an organization that has given so much to me.

Being an alumni of the drum corps has definitely guided some of the decisions and methods I’ve taken while working with the winds ensemble. It is all of our highest priority that we provide a successful, educational, and beneficial environment for all of our new members. We definitely want to pass on what it means to be a Blue Knight. 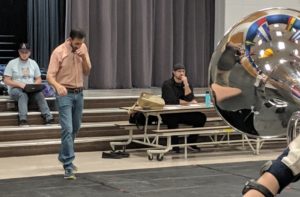 I have been involved with WGI as a percussion performer and instructor for over a decade.  I’ve watched the WGI Winds category grow over the past few years so when BKWinds was announced, I couldn’t wait to get involved.

As a BK alumnus, I find myself relying on my BK experience in both the corps and Percussion ensembles to inspire a new generation of performers to succeed in the marching arts.  My experience informs my instruction and helps me push BKWinds to new heights. 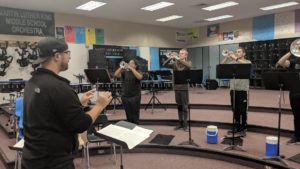 I have been working with high school groups for six years, but I wanted to find a way to get involved with a higher-level performing ensemble.  I had seen the BK Winter Brass ensemble that Abe and Jeff had put on in the mid 2000’s, and I knew they would have the same standards and attention to detail they had put into that.

Having marched with the corps and then traveling with BK to Bahrain, I knew that the standards would be high for the group, and that the performers would take a professional approach to their show.   Also, having so many of the instructors that were instrumental in my own drum corps experience (Abe, Jeff, Robbie) working with this group made joining the team as an instructor a little like coming home. 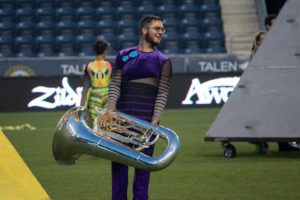 Having the chance to start giving back to an organization that has done so much for me was an opportunity that I just couldn’t pass up. I also know first hand that getting a foot in the door with Blue Knights and the Ascend groups can open so many doors for young performers, and giving local musicians and performers a new experience in this arena is very exciting to me.

I feel like I’ve gained a lot of knowledge from my years performing with the group, especially on the visual front. I’ve always enjoyed the unique styles of movement and the visual identity that the Blue Knights D&BC has etched out for themselves, and I look forwards to the opportunity to bring this unique visual look into a competitive area that hasn’t seen anything like it before. 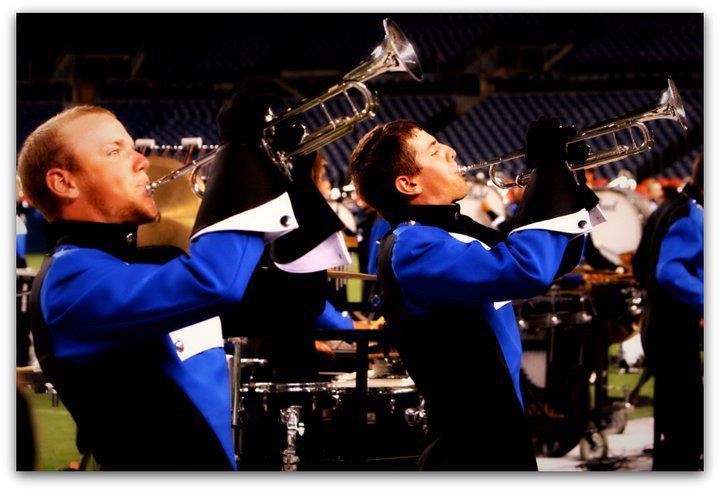