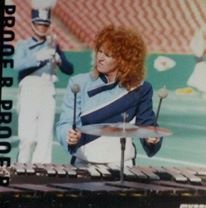 What section?
1988 Cymbals
1989-1990 Front Ensemble
Where did you attend high school?
Arvada West HS
Education beyond high school?
Some college
What is your current occupation?
Valuation Coordinator in Real Estate
Why did you choose to march with the Blue Knights?
My friend Dan Roush convinced me and several other to check it out.  There were 6 or 7 of us that went to the first camp in the fall of 1987. There was 5 of us that marched the summer of 1988.  Dan’s father picked us up in Kansas City.  All our luggage tied to the top of his van and 6 teenagers stuffed inside.  Only missing 1 shoe by the time we got back to Denver.
What is your favorite drum corps memory?
So many.  Working with some of the most talented instructors in the industry. Ralph Hardimon, George Zingali and Gary Brattin. The I Go On moment in 1990.  Coming off the field feeling we had that amazing show and finding out we did not make finals.  I guess I did not know or realize at the time, going into semi’s we were in 12th.  I don’t know how I missed that.   My other memory is in St. Louis in 1989, looking up at the Jumbo-tron and seeing myself on the screen.

I participated in the Alumni Corps in 2018 and it was just like stepping back in time.  From the first rehearsal it was like I was 17 again.  I worked harder in those 3 1/2 days than I had in years.  One of my co-workers asked me how it was and if I would do it again. Said it was exhausting but would do it again in a heartbeat. 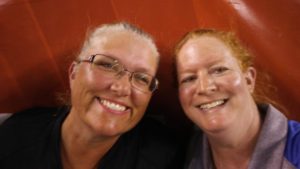 Seeing old friends and running into another that until we started talking didn’t know who he was.  30 years and people change a lot.  Coming together with stories and memories of the years we marched.  Performing at Mile HI gave me chills as we went onto the field.  Singing I Go On after the show with the group brought a flood of emotions.  My friend Shannon Wood was next to me and we started the tears at the same time.  Can’t wait for next time.

How have the Blue Knights impacted your life?
I met amazing people from all over the country.  With Facebook we have reconnected.  I love the fact we can keep in touch.
What are some of the Blue Knights’ core values/principles that have resonated with you in life?
I pay attention to details. It shows in my work that I see details in the documents I review. I’m dedicated.  I stayed at one job for over 20 years when I should have moved on way before.
What advice would you tell someone considering trying out for the Blue Knights?
Do it.  You will make friends forever. Life long memories. 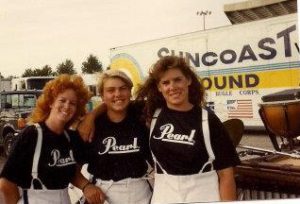 How would you like to see other Blue Knight alumni get involved in the organization?
Volunteer and give.  I have been more involved the past few years and I feel wonderful telling stories from the past.  Explaining where I Go On came from and how it impacted the 1990 corp. Memories- 1990- We were in staying in LeRoy, NY for Finals in Buffalo. This little town was like something out of a 50’s TV show.  Tree lined streets and small shops.  A local reporter wanted to interview us.  They sent her to the Front Ensemble.  We talked and she took us for ice cream in her convertible. I wish we could of seen her finished article.One of my biggest regrets is not coming back in 1991 to make it in the top 12.  I might of not marched but I was there in the stands in Dallas and Madison in 1992, (which would have been my age out.)  I thought I had to move to adult life.

∴ Want to be featured in a future Alumni Spotlight? Fill out the  Alumni Update form here or email: communications@ascendperformingarts.org