After the corps finished up a full day of rehearsal, the members and staff were released to get ready for the evening’s plans. Meanwhile the volunteers and cook staff were hard at work to provide a home-cooked meal for the corps that night.

Once the corps finished watching the 2018 slide show and enjoyed a delicious dinner, Mark Arnold, the Executive Director, welcomed all in attendance and thanked the numerous volunteers, drivers, admin, and staff who helped make the season possible. He also thanked the members of the corps for their hard work and dedication for the 2018 production, “The Fall and Rise”.

Following this, Mark then let the caption heads to present their section awards. 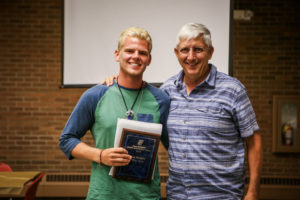 Blue Knight of the Year: John Strang with Mark Arnold

Following the Caption Awards, Ricky Grasso and several other alumni in attendance helped
recognize the 44 age-outs who were apart of of the 2018 Blue Knights as their last year of their DCI marching career:

∴ Check out more photos from the banquet and from the summer on the Blue Knights Drum & Bugle Corps Facebook page.