Blue Knight’s Day was first declared in 1987. To celebrate Blue Knights Week in 2015, we want to share and celebrate the history of the organization, which is in its 57th year of existence.

The Broncos Stampede & Brass perform at the Colfax Marathon

Colorguard: In 1963, at the VFW Drum Corps Championships in Seattle, the Blue Knights color guard won a championship beating out the very competitive Troopers and Cavaliers color guard.

Dots: The iconic 1991 uniform which featured 21 dots was designed by Blue Knight alum, David Lacy and was inspired by the US Air Force Academy ceremonial uniforms. The USAFA is located in Colorado in Colorado Springs. The dots, now in a 10 dot configuration, are a trademark of the group.

The Eldoradans: Formed in 1971 by a Blue Knight alum, the Eldoradans were the arch rivals of the Blue Knights, beating them for the 1971 Colorado American Legion title. They wore conquistador styled uniforms and last took the field in 1976.

Hardimon, Ralph: Ralph Hardimon is the music consultant for the drum corps. Hardimon is famous for being the caption head of the Santa Clara Vanguard from 1981 to 1990. During that time SCV won high percussion four times, and 3 DCI Championships. He was on staff with the Blue Knights in 1992, when Mike Jackson aged out.

I Go On: In 1990, the Blue Knights dropped from 12th place in quarterfinals to 13th place in semifinals just missing finals (Top-12). Heartbroken, the drum corps would sing “I Go On” from Leonard Bernstein’s Mass, which was a part of the 1990 program. It is now sung by the Blue Knights before every performance and is the official corps song.

Jackson, Mike: Mike Jackson is the current battery caption head/arranger for the Blue Knights. He marched with the Blue Knights Drum & Bugle Corps and aged out in 1992. Mike is also a Winter Guard International Hall of Fame member, and co-founded the Southern California Percussion Alliance.

Knights: There were 3 other drum corps named the “Blue Knights” They hailed from St. Paul, MN, Ironwood, MI, and Berwyn, IL. The Blue Knights from Denver are the only surviving corps that carries the name.

Lightning: In 1986, the Blue Knights’ practice field was struck by lightning sending several members to the hospital. Despite the hardships, the drum corps finished four places higher than the previous year at the DCI Championships.

Mark Arnold: Mark Arnold is the current corps director for the Blue Knights Drum & Bugle Corps. He took charge of the drum corps in 1985, after years of instability from 1973-1985 when the Blue Knights saw 8 different directors. He was DCI’s “Director of the Year” in 2004, and is also a 2014 DCI Hall of Fame member as well as one of the longest tenured DCI directors.

Nevin, Mike: Mike Nevin is the program director for the Blue Knights Percussion Ensemble. He wrote the music for the show “A Knight’s Tale”, as well as several of the percussion ensemble shows. Mike also won a DCI International Class Championship with the Yokohama Scouts of Yokohama, Japan.

Ohio: Every year the Blue Knights Percussion Ensemble travels to Dayton, Ohio to participate in the WGI Percussion Championships. Dayton is also the birthplace of the Wright Brothers. 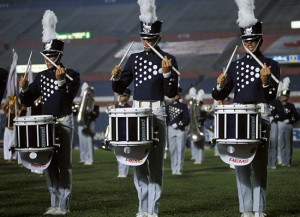 Percussion: The Blue Knights places a high emphasis on percussion, following the philosophies of Fred Taylor, who formed the corps to give an outlet for his percussion students. Many legends in the percussion world have marched and/or worked with the Blue Knights Drum and Bugle Corps, and Percussion Ensemble. Some famous names include: Mike Jackson, Jeff Queen, Ralph Hardimon and Mike Nevin.

Queen, Jeff: Jeff Queen was a snare drummer that marched with the Blue Knights. He was a DCI I&E (Individual & Ensemble) Champion on solo snare in 1994 and 1995. He would go on to become a member of the first cast of Blast!, along with former Blue Knights and current Carolina Crown brass instructor Andy Smart.

Ray Route: Ray Route was the Blue Knights Drum & Bugle Corps’ first director from 1958 to 1972. Under his direction, the drum corps went to VFW nationals in 1963 where they placed 10th. With this newfound success, the Blue Knights were encouraged and drove itself to the success it finds today. Ray Route passed away in 2014.

Strecker, Judy: Judy Strecker was the first drum major of the Blue Knights. She held the position by herself from 1958-1960, and again in 1961 with Larry Bramble and Bonnie Parenteau.

Tags: Keeping with drum corps military roots, the Blue Knights were very militaristic. There were merits, demerits, ranks (i.e, Private, Corporal, Sergeant, Lieutenant, Captain, etc.) promotions and demotions. Members of the drum corps were historically required to wear their dog tags and weren’t allowed on the busses without them.

Uniforms: Early Blue Knights uniforms were made by hand by parent volunteers. In the 80s, the Blue Knights adopted a white uniform with a blue sash across the shoulder. It could be removed to reveal a pink sash. In the 90s, they wore the 21 dot uniform. In the 2000’s they donned a black and blue uniform (with minor changes) before adopting the baby blue uniforms they currently wear.

Blue Knights perform at the World Ski Cup in Vail

Vail: In the 1990’s the corps performed in parades in Vail, however in 2015, members and alumni of the Blue Knights performed at the open ceremonies FIS Alpine World Cup Ski Championships in Vail, Colorado with dancer Ron Myles.

Xylophone: Xylophones (and the front ensembles other instruments) are generously provided by Majestic Percussion. Mapex provides drums for the battery, and Jupiter provides brass instruments for the hornline.

Zingali, George: Often cited as one of the greatest drill writers in DCI history, Zingali wrote drill for the Blue Knights, as well as Star of Indiana, the 27th Lancers, and The Cadets. He remained with the Blue Knights for the years prior to his passing in 1992.

Stephen Bates’ involvement with Ascend Performing Arts includes membership in the Blue Knights Percussion Ensemble in 2014 and 2015.  He is pursuing a Communications degree in Digital Film-making at the University of Colorado at Colorado Springs, where he also works as a graphic designer/marketing coordinator for the office of Student Life and Leadership.

Stephen co-founded Tomahawk Percussion in 2014 with fellow Blue Knights Percussion Ensemble member, Tom Griess. Tomahawk Percussion was founded to provide resources, support, and a community for those involved in the marching arts.  Outside of school and music, Stephen was TIME Magazine’s Person of the Year in 2006, is a shareholder/part owner for of the Green Bay Packers, and has had his name engraved into NASA hardware that has flown into space.