Blue Knights to Perform in Bahrain 2017

DENVER, CO – Ascend Performing Arts has been commissioned to produce a major performance ensemble for the Opening Ceremonies of the 2017 Formula 1 Gulf Air Bahrain Grand Prix. The trip, scheduled from April 12th – 18th, will take place in Manama, Bahrain during the Formula 1 race week and is expected to showcase race car drivers from 42 nations, for over 50,000 on-site spectators with an estimated 500 million worldwide television viewers, and media and broadcast entourage of approximately 2,000 personnel.

“We are very honored to be invited to such a prestigious event in Bahrain,” said Mark Arnold, Executive Director of Ascend Performing Arts. “This is another amazing opportunity for our organization to perform on the global stage.”

Formula One (also known as F1) is the highest class of single-seat auto racing that is sanctioned by the Fédération Internationale de l’Automobile (FIA). The FIA Formula One World Championship has been the premier form of racing since the inaugural season in 1950, although other Formula One races were regularly held until 1983. The “formula”, designated in the name, refers to a set of rules, to which all participants’ cars must conform. The F1 season consists of a series of races, known as Grands Prix (from French, meaning grand prizes), held worldwide on purpose-built F1 circuits and public roads.

This will be the 3rd year for Ascend Performing Arts to perform for an international audience as part of their Ascend Entertainment division. A 50-person Blue Knights ensemble participated in a number of events including educational clinics, a parade and staged exhibition performances that culminated with a performance at the Taiwan Taoyuan Band Festival on May 24, 2014. Last year, the Blue Knights Performance Ensemble performed as the feature act in the Opening Ceremonies for the 2016 FIS Alpine World Ski Championship in Vail, Colorado. Ascend Entertainment ensembles consist of performers from the Blue Knights Drum & Bugle Corps alumni, Blue Knights Indoor World Percussion Ensemble alumni, Opus X alumni and the Denver Broncos Stampede Drum Line and Brass.

For the upcoming trip to Bahrain, a larger performance ensemble is needed to fill the 100 performer positions. Ascend is seeking additional brass performers in the Denver-area for this opportunity. Brass performers interested in being considered should complete the online form below to receive additional information. Due to limited preparation time, interested brass performers should be at least 18 years old, be in good physical condition, have a strong marching background, and have a valid passport that expires no sooner than October 18, 2017. Open auditions and rehearsals are being finalized for the coming months to prepare for the international tour. 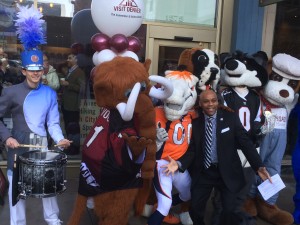 Ascend Performing Arts can provide a soloist drummer, a small brass ensemble or full marching band for a grand opening or a convention center performance anywhere in the world. Our performers will arrive prepared to take the stage in any size production.

Musicians  who join are considered for a variety of paid performance opportunities in the Rocky Mountain Region and beyond.

Complete the form below to join our roster for periodic performance opportunities. Once your application is reviewed, you will be contacted to discuss your experience, desired roles and a possible audition in our performer cast.

“We very much enjoyed having the Blue Knights perform for our U.S. Taekwondo Hanmadang opening ceremonies!”
~Rebecca N.USTC Director of Events