Darrell Griffin Selected for 2018 Volunteer of the Year 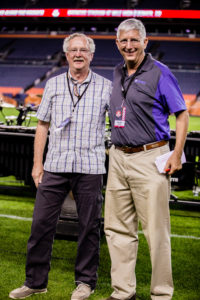 The Lynn Lindstrom Volunteer Award was established to honor Lynn’s legacy of volunteerism. Lynn Lindstrom, Chairperson for Drums Along the Rockies since 1985, lost the battle to cancer in January, 2016. Lynn became involved with the Blue Knights Drum & Bugle Corps with her husband George (who was a past Blue Knights Drum &amp; Bugle Corps Executive Director) in 1983, and was one of our most ardent supporter and dedicated staff member. Lynn and George headed up Ascend Events for over 30 years, planning and managing the Drums Along the Rockies, Corps Encore, and the Friendship Cup Scholastic Marching Band Competition shows.

Darrell Griffin was introduced to Drum Corps when his son, John, decided to march for the Blue Knights. As a supportive father, he and his wife, Deb, did the obligatory volunteering when asked. Little did he realize that the hours he would spend would turn out to be the equivalent of a full time job. That year, 2011, he volunteered to drive, cook and become the general “clean up” guy for summer tour. He became aware of all that was needed to make the experience successful for members. As a result, he took on the job of Volunteer Coordinator and was asked to join the Ascend Corporate Board. Darrell also filled in for volunteer spots he could not fill. Darrell then took on the daunting task of learning what he did not know about nonprofits. He asked questions, attended conferences, and read, and read, and read. He continues to participate in weekly webinars to assist the growth of Ascend. He served two years as Treasurer and is currently ending his three year term as Chairman of the Board. He guided the Corporate Board to develop long-term policies necessary to implement financial stability for the organization with a renewed strategic plan. 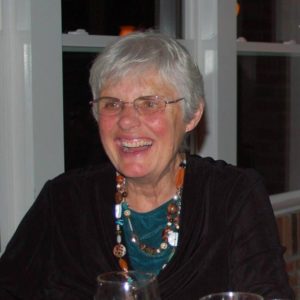 Darrell is “hands on” for all aspects of the organization. He is the first to volunteer to assist. He was instrumental in the success of the fundraising for the new Food Truck and spent many hours with strategic committee members in the planning meetings. He participated with hammer and nails in the actual finishing of the truck. Deb was initially involved with the monthly camp cooking, so he would assist in completing tasks necessary for camp which included washing dishes, sweeping the floor or running to the grocery store. He also drove the van for pick-ups at the airport. He still volunteers in the “kitchen” during camps. During his term as Chairman of the Board, he has attended (on his own dime) every Drum Corps International Finals because he feels it is important to support the members.

Although much of his time is occupied with following up on the needs of Ascend, he finds time to fly fish. Darrell is passionate about Ascend’s mission and is dedicated to the well-being of all involved with Ascend-staff, volunteers , parents, but of utmost importance, overseeing that all is done to support the members of all of Ascend’s ensembles.

∴ Get involved and volunteer with the Blue Knights! Contact Volunteer@AscendPerformingArts.org.