ALLENTOWN, PA – This summer, the Blue Knights have been lucky to get thousands of hours’ worth of amazing volunteer help, but for the last week we’ve had someone a little bit unusual on board with us. Eric Skinner has been volunteering on the cook truck since the end of July, and also happens to be the band director at Gallia Academy High School—our wonderful housing hosts from July 27th. We picked him up along the way, and he was with us until Monday, August 3rd (though there were efforts to keep him on until finals). His wife said it was okay via Skype, but he still has an entire marching band show that still needs to be completed for his own band—GAHS band camp starts the Monday after DCI Finals in Indianapolis.

Eric graduated from Ohio State University with a degree in music education, and first worked as the percussion instructor at GAHS. Last year was his first year as band director and the change wasn’t always easy, but he says the kids made it all worthwhile. “I really… I love my job,” he says with a laugh, continuing to rave about how wonderful his students are. His enthusiasm for his job is apparent and it’s certainly part of what makes him so well-liked. 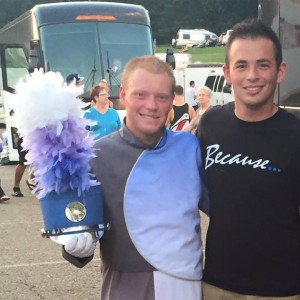 While he may not be on tour with us through finals, Eric will still be in attendance to cheer on his favorite Knights. He started following drum corps at thirteen years old, and still recalls the night clearly. It was in Columbus, OH, and the show that got him started was the Cadets’ 2005 program, “The Zone.” After that, he didn’t look back.

Reflecting on his past, Eric says one of his biggest regrets is not marching when he had the chance. He is a percussionist, and when he started as a percussion instructor at GAHS, he had the opportunity to befriend Mykal Haner—one of the hornline members of the 2015 Blue Knights. As their friendship grew, Mykal urged Eric to come on tour even for a little while to help out. As soon as it was settled that the Blue Knights would be housing at GAHS, Mykal contacted Eric, told him that the Blue Knights needed some extra hands on tour, and Eric found a way to come on board, charisma and contagious laughter in tow.

It’s up in the air as to whether or not Eric will be able to join us on tour again in the future, but even if he doesn’t we are incredibly grateful for his presence and we appreciate the support more than we can say. Thank you, Eric!

∴ Would you like to find your volunteer home with us?  Visit our Volunteer web page at https://ascendperformingarts.org/support/volunteer/ and send us an email to connect.  Your home can be here.  Make our youth your extended family!

∴ Do you have a nomination for a future Spotlight article?  Please email them in.