Meet Robert Clark – figure skater, tympani player, and volunteer in our drum corps program.  A man of multiple talents and we’re especially fond of the latter.

For the last three years you would usually find Robert helping at our Denver camps around lunchtime prepping food, serving, and washing dishes.  Or you may have seen him during one of the gatherings to clean and organize the food trailer and corps hall.  He doesn’t have anyone in the corps and just comes in for his love of the activity and support of our organization.  He’s currently taking on the chore of washing all the smelly corps uniforms from last season.  You’re a brave man Robert!  🙂 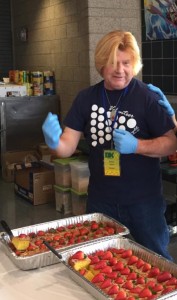 No offense Robert but you don’t strike us as a figure skater.  What’s the story there?  “I began as a figure skater in 1969 and performed in my first competition in Dallas Texas at the age of 9 (placing 11th out of 12 competitors in my age classification). I continued my skating practice and at the Southwest Regional competition at the Broadmoor in 1970, I was the first and only performer to be awarded with two medals in the competition (3rd place for individuals, and first place for the Bronze dance division).”

So you say you played Tympani and did Drum Corps?  “Yeah. I began my music career at age 12. I performed in junior high band, and then was one of three freshmen to be accepted into the A band at Grissom High School band. By my junior year I was selected as section leader as well as my senior year. In the fall of 1979 a friend who had joined Spirit of Atlanta mentioned that there was a spot for a tympani player. I tried out for the position and was selected. I performed with Spirit of Atlanta in 1979, 1980 and 1981. The Spirit of Atlanta 1980 show was shown in Theaters across the nation as one of the top 12 drum corps shows in the history of DCI. In 1981 I was the first solo timpanist for the Spirit of Atlanta. In 1980 Spirit of Atlanta tied for the high drums award (with the Bridgemen) and was .6 points from 1st place.”

Let’s back up a second.  No one in the corps?  Are you crazy? Why would you do such a thing?  Robert says: “Being both a fan of drum corps and participant since 1975, I have felt that Drum Corps is one of the best experiences for a growing individual. As a participant, many volunteers had a great impact on my experiences and growth as a result of their tireless giving and support often without thanks. After moving to Denver I thought that in the Spirit of those volunteers before me, perhaps I too could lend support and help to the Blue Knights in effort in some way to pay back those who helped and supported me in my younger years.” 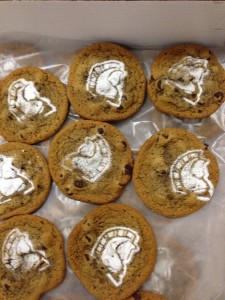 Powdered Sugar Art! Robert made these for the kids at a rehearsal camp.

We love Robert’s volunteer spirit and other organizations have benefited from that too.  He volunteered for the East Coweta Band Boosters as Director/Producer, instructor, writer and design head for their Percussion Company.  East Coweta was awarded the National Festival Disney Champions for all marching units while he was director there.  He also volunteered with the Northgate Band Boosters, and the Corpsvets Drum and Bugle Corps.   He’s filled in wherever needed with these organizations and did everything from cooking to working concessions to building props.  We hope you never need to take advantage of one of his blood donations.  🙂

Does volunteering have any special meaning for you?  “As I mentioned before. My reason for volunteering is to try to return the help and support that those before me gave to me when I was involved as a participant in drum corps. My motto is helpfulness and compassion are a foundation for a successful organization.”

Robert has some other words of wisdom regarding volunteering:

On Behalf of Ascend Performing Arts and the Blue Knights – Thank you Robert!

∴ Come meet Robert and others like him.  We would love for you to volunteer with us and, if you want one, we can help you find your niche with us.  Visit our Volunteer web page at https://ascendperformingarts.org/support/volunteer/ and send us an email to connect. Make our youth your extended family!

∴ Do you have a nomination for a future Spotlight article?  Please email them in to: Volunteer@AscendPerformingArts.org