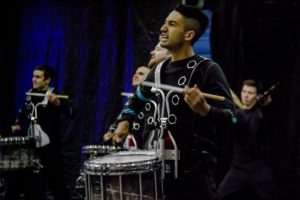 DENVER, CO – The Corporate Board of Ascend Performing Arts invites family, friends and fans to join the members and staff to a send off show for the Blue Knights World Percussion Ensemble before they depart for the 2017 Winter Guard International (WGI) World Championships. The event will be free admission but we are asking for donations at the door that will go toward the member’s Funds for Finals campaign (donate here).

The send off show will be hosted at Standley Lake High School in Denver, Colorado (map) on Sunday, April 9, 2017.

After rehearsing most of the day, the Blue Knights Percussion Ensemble will begin warming up “in the lot” at 4:30pm, a standstill run at 5:00pm and a full performance run at 5:15pm with the conclusion of the performance at 6:00pm.

We would love to have you attend and help us celebrate the conclusion of what has turned out to be an exciting year for the Blue Knights Percussion Ensemble as they present “The Cave” in Dayton for the WGI World Championships.