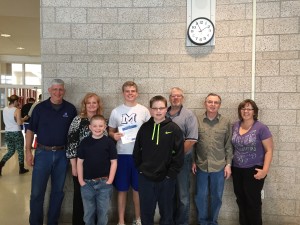 DENVER, CO — The Blue Knights Percussion Ensemble held a potluck lunch event for family and friends during their Sunday rehearsal on March 1st at Rachel B. Noel Middle School.  The potluck, which was hosted by the Ascend Performing Arts Board of Directors, had over 100 attendees.  A pasta lunch was served by members of the Board of Directors, followed by a “show and tell” performance from the Blue Knights Percussion Ensemble showcasing their 2015 show production “The World’s A Stage” (learn more about the show production by becoming an Ascend Insider!). 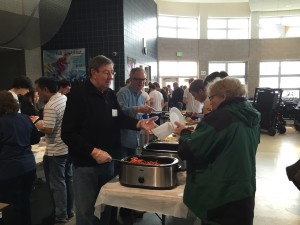 The 2015 winner of the Dan Burke Memorial Scholarship was also announced at the potluck.  This year’s winner was John Strang, bass drum player and 3rd year member of the ensemble.

“A strong work ethic and commitment to the group were some of the qualities that Dan Burke brought to the ensemble in his years as the Director of the group and John certainly exemplifies those qualities” said Mark Arnold, Executive Director of Ascend Performing Arts.

Dan’s wife Gwen Burke, along with his sons Coleman and Carson and his Uncle Gary Lund were on hand to present the award to John. 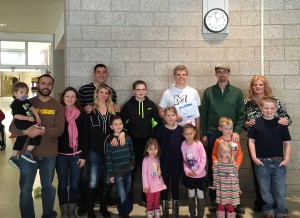 BKPE alumni and their families gather with John Strang, Gwen Burke and her sons.

After a successful debut performance at the RMPA show the night before where the Percussion Ensemble took 1st place in their division with an 83.25, the potluck was a great way for members to relax with family and friends and re-energize for the afternoon’s rehearsal.

Next up for the ensemble is the Denver WGI Regional this coming March 7th at Northglenn High School (map).

Interested in giving BKPE a hand at the show?  Email: Volunteer@AscendPerformingArts.org